Special Feature on the Mozu and Furuichi Tumuli Clusters

Determination of National Recommendation for the Mozu & Furuichi Tumuli Clusters as a World Heritage Site!

A "tumulus", or "kofun" in Japanese, refers to a large tomb created in Japan during the 3rd - 7th centuries. Earth was built up high into the shape of a hill, and high ranking individuals or those in positions of authority were interred inside. The "Mozu and Furuichi Tumuli Clusters" is the overall name given to a cluster of such tumuli that were created in the south of Osaka during the second half of the 4th century through to the first half of the 6th century. More than 200 were constructed at the time, and of the 89 that remain those in Sakai are known as the "Mozu Tumuli Cluster", while those spread across Habikino and Fujiidera are known as the "Furuichi Tumuli Cluster." In July 2017, these were selected as candidates for national recommendation as a UNESCO World Heritage Site, and we are currently involved in a variety of undertakings working toward their actual registration.

Highlights of the Mozu Tumuli Cluster

The Mozu Tumuli Cluster spreads across a four square kilometer area in the north of Sakai. There were more than 100 tumulus here originally, but now only 44 remain. The principle tumuli found in the cluster are the Nintoku-Tenno-Ryo Tumulus, the largest keyhole-shaped tumulus in Japan, and the Richu-Tenno-Ryo Tumulus, boasting the third largest size in Japan. Other tumuli of note include the Itasuke Tumulus and Gobyoyama Tumulus, from which various burial accessories have been recovered, and the Nisanzai Tumulus, which has been evaluated highly for its beautiful shape. Although the public are not allowed inside, just walking around the exterior will surely let you appreciate their overwhelming scale. Furthermore, places for worship have been erected at the entrances to the "Tenno Ryo Tumuli" that house the ancient emperors of Japan, and they are also popular photo spots.

Stands alongside the Pyramid of Khufu and the Mausoleum of the First Qin Emperor as one of the three great burial mounds of the world.
Thought to have been created in the 5th century, it has a mound length of approximately 486m, making it the largest keyhole-shaped tumulus in Japan, and is dedicated to Emperor Nintoku.
Three layers of moats surround the tomb, and in accordance with these more than 10 medium or small tumuli were also erected in the vicinity. The Nintoku-Tenno-Ryo Tumulus VR Tour is held every day inside Sakai City Museum, which stands adjacent to the tumulus.
This tour uses VR technology to allow you to look down upon Nintoku-Tenno-Ryo from 300m in the air, as well as to experience a CG recreation of the stone chamber inside the tumulus.
(*No tours held on the first Monday each month. As well as in Japan, the experience is also offered in English, Chinese, and Korean) 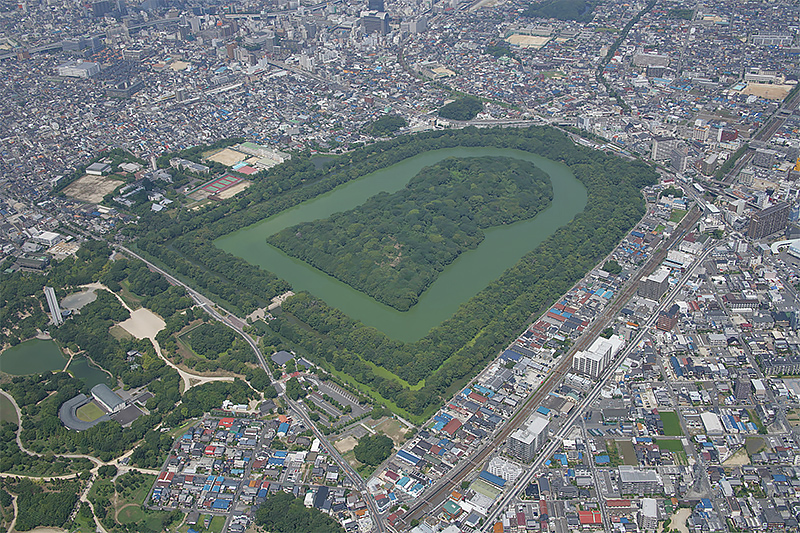 The third largest keyhole-shaped tumulus in Japan, with a mound length of approximately 365m. Thought to have been created at the start of the 5th century, Emperor Richu was interred inside. Cherry trees stand along the moat on the west side, and there is a "view spot" on the north side that allows the entire circular section to be looked over. Experience the elegance of this vast tumulus along with the stunning surrounding scenery. 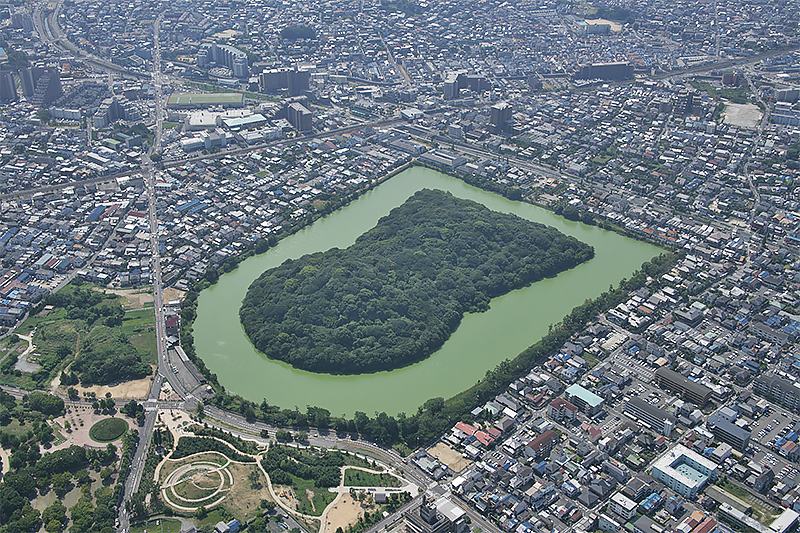 A tumulus located on the northern edge of the Mozu Tumuli Cluster, with Emperor Hanzei interred inside. Created in the second half of the 5th century, it has a mound length of 148m.

Rental bicycles are recommended for taking a tour of the tumuli!

If you plan on seeing as much as possible of the Mozu Tumuli Cluster, which features a variety of tumuli spread across an area of approximately four square kilometers, making use of convenient rental bicycles comes highly recommended. A path approximately 3km in length has been created around the outside of the Nintoku-Tenno- Ryo Tumulus, and the 38.5 hectare Daisen Park is also located nearby. The park features a Japanese garden where you can enjoy seasonal Japanese scenery and the Sakai City Museum where you can learn more about the culture of tumuli. It is also possible to enjoy lunch or a picnic on the grass.